Today's three resources worth reading, with a bonus link on conscience. Click on Spiritual Coffee for prior roundups to sharpen and equip your Christian thinking and enlarge your heart. 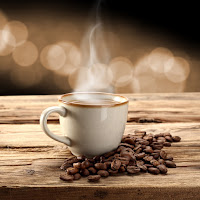 What Is a Dad to a Two-Year-Old?, Jonathan Parnell
Just wow. This is short but profound. What is the most important thing you give someone in comforting them? Being there. This captures it powerfully, and it applies to everyone, not just kids. Adults experience the same thing. I recall reading an experienced pastor's description of how he learned through awkwardness and speechless insecurity in a hospital room that what the patient really needed was just for him to be there. Don't shortchange the value of your presence and companionship. It's more important to give yourself than to know what to do.

Biblical Counseling: Getting Oriented, David Powlison (CCEF, Journal of Biblical Counseling)
(If that link doesn't load the PDF, use this one and click on the first article of the current issue.)
Biblical counseling is really just what Christians do for each other all the time when we listen, pray for each other, and help bear each other's burdens. We don't realize how often we are counseling, yet it should be everyday life in the church. Powlison gives a free roadmap for what biblical counseling looks like and how it helps take the truths of Scripture and connect the dots with a person's here-and-now challenges and needs. If you want to care for people well, this is a very valuable resource.

A Vote to Check Unpredictable Evil with the Predictable, Thabiti Anyabwile (TGC)
Pastor Thabiti gained a lot of attention earlier this week for announcing he would be voting for Hillary Clinton in November, because he believed Trump was much more dangerous. This is a very careful and thoughtful explanation of why he decided to do that - and see the next link for his elaboration on conscience. Although I disagree with his decision, I am very glad he is talking about it. I am posting this primarily because it challenges me and isn't exactly my way of thinking. Christians must avoid turning dissatisfaction with Trump into a new reactionary mindset that demands everybody handle it the same way. This conversation on working through our own consciences to reach a decision is important. Let's listen and not shut it down.
"For personal context, you have to consider my argument over the past several years. I’ve argued on principled grounds that I could not vote for anyone in the last couple of presidential elections because I found their moral positions on vital issues unconscionable."
"This election more than any other that I can remember has many Christians seeing with perhaps equal clarity the evil of both options. Many, as I would have for the past decade or more, are opting to sit this one out."
"If we’re not just being hyperbolic with the comparison, but we truly believe ours is a choice tantamount in our context to Stalin or Hitler, then the question is, How do you defeat them both? Both. Neither should rule. Either is bad for everyone.
"Honestly, I don’t know how you defeat them both. If there were a viable third party candidate, I’d quickly vote for them. I’m stressing “viable” not as a means of simply lapsing into some party loyalty. Remember: I have none. I’m stressing “viable” because I think the threat of either candidate is real."
"I don’t think the goal right now is merely a quiet conscience. I don’t see how such a goal can be met without abdicating a significant moral responsibility to oppose evil. It’s not enough to say, “I had no part in the evil.” We must actually resist the evil as best we can. We’re in that Bonhoeffer-like moment where we can choose peaceful exile in some Evangelical enclave or enter the fray bearing our cross."
"If a person can sit by peaceably while evil progresses, then they have a conscience problem of a different sort. It’s not the problem of seeming to actively support some evil by a vote, it’s the problem of a dull conscience that ignores evil. To seek a quiet conscience by not voting seems to me an abdication of moral responsibility. Better is voting third party or writing in."

A Quick Word on the Conscience and Christian Witness, Thabiti Anyabwile (TGC)
This is very good, and if you find it helpful (or especially if you don't), you should read this longer piece by Andy Naselli, who just published a book addressing every Scripture on the conscience.
Pastor Thabiti:
"many people think their conscience is the final arbiter of what’s right and wrong."
"To be clear, no one is arguing that anyone should “vote against their conscience.” What I’m suggesting here is that we have to have a biblical view of the conscience, inform it by the Bible, before we can act in ways that properly satisfy it."
"it’s not enough to simply say, “My conscience won’t let me.” We actually have to ask our conscience some questions about the whole counsel of God in our situation. We may still end up saying, “My conscience won’t let me based upon the word of God,” but that’s a better position than an implicit trust in one’s conscience"
"If we trust our conscience without inspecting it by the light of God’s word, then we’re closer to Gandhi in our view of the conscience than we are the Lord Jesus."
Posted by Anthony Bushnell at 4:58 PM