The Narrow Road Between Arrogance and Obscurity in Leadership

Whenever a leader falls publicly because of sin, there is a deafening chorus of criticism, judgment, and "I told you so" declarations. This time it is Darrin Patrick, who was lead pastor of The Journey church in St. Louis and vice-president of Acts 29 church planting network (he has now been removed from both roles, and has been removed from The Gospel Coalition council webpage). This is a time to mourn and grieve over the brokenness that has been caused in The Journey church community and in Patrick's family. Our prayers for them all should outstrip our comments and judgments by at least 10 to 1. 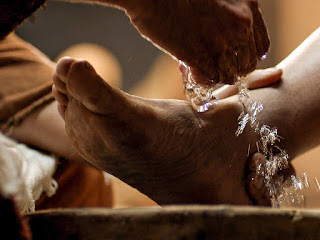 We do want to know what went wrong. Being respectful and mourning with those who mourn doesn't mean we don't learn anything. The main reason I am posting anything is that Scot McKnight has set us a gracious example in how to reflect on what happened. More on this below. I understand that a lot of the anger and disgust in the comments that surge up at a time like this comes from past experiences of seeing church leadership act too slowly in restraining and correcting a leader who is abusing his office or the trust of his congregation. This multiplies the tragedy for the leader and his family and for the people he has betrayed. There is a swell of frustration from people who feel they have watched those with a responsibility to act do nothing, and the comments give vent to that.

Yesterday I was engaged on Twitter by some people about this news. I tried to respond with moderation. My main concern is that when a church does act to remove a leader who is abusing his office, this storm of comments and criticisms has an unintended consequence: the more intense and explosive we make it when a leader is removed, the more hesitant and reluctant churches and ministries will be to actually take action. When we slam churches and their leadership over and over on social media when they announce a leader's removal, we are encouraging exactly the opposite of what we want. We encourage them to avoid such controversy and humiliation for their church and the person they are removing by keeping things quiet and private. If you want public accountability in the church, don't make doing it such a fierce and angry experience.

Before public accountability, however, there should be private accountability among leaders to prevent things from getting this far. We want to mourn over this now, but also learn how to prevent more of this in the ministries we love. I don't think it could be done more wisely than Scot McKnight's analysis here. I'm sharing some excerpts that I hope will encourage you to read it all. McKnight does three things that make this article worth saving and using: 1) he gets the facts and doesn't hide from the realities of what has been going on, but he also doesn't get detoured by spending a lot of time criticizing; 2) he chooses a positive and compelling example of how to be a servant leader and do accountability right, using the contrasts to make his point (instead of just talking about what someone else did wrong); and 3) he gives us a very wise and solid model summarized from Kent Keith for what kind of heart and development a leader must have in order to faithfully and humbly serve the church.

As McKnight observes, the problem is not simply that people around a leader should be paying more attention or should have acted sooner. The problem is a fundamental difference in the whole pattern and philosophy of leadership. That's what has to change. This is core training for any leader. Bookmark it. Keith's Paradoxical Commandments of Leadership at the end are also brilliant.

McKnight identifies the style of leadership that led to Patrick's crash this way:

In one simple term, authoritarianism. The solution to this requires ... a gradual growth into a leader who fosters the life of others instead of himself. This isn’t something that can be fixed by reading a new book, nor can it be learned over a weekend retreat. It requires working under a skilled servant leader who can supervise the development of new patterns.
People enter into leadership for a variety of reasons, including passion and skills and gifts and a desire to lead and a desire to control and — here comes our theme — a desire to serve. I believe many today who are leaders have gifts and skills and passion but too often are dominated by a desire to control and lead and not a desire to serve and lead through empowering others.
Gospel-shaped leadership is servant leadership, not control leadership and not dominating leadership.
Comparing servant leadership with authoritarianism (or the "power model"):
The servant model of leadership counters the power model, which is focused on “how to accumulate and wield power, how to make people do things, how to attack and win. It is about clever strategies, applying pressure, and manipulating people to get what you want” (19). That is, it is realpolitik — a theory that is distant from a theory of ethics. Servant leadership theory is first established in ethics and then works out that ethic through leadership.
Here are the key practices of servant leadership?
1. Self-awareness.
2. Listening
3. Changing the pyramid.
4. Developing your colleagues.
5. Coaching, not controlling.
6. Unleashing the energy and intelligence of others.
7. Foresight.
McKnight is quoting principles that have been tried and tested over many decades. The crux of servant leadership is that it doesn't try to control or manipulate the outcomes. It isn't about getting what you want by getting everyone to do it your way. It is about serving the people around you, investing in them, setting an example of humble submission to Christ, and helping others reach their greatest potential. The glorious truth is that when you lead like this, you encourage more success and growth from everyone around you and you often reach the right goals as well.

This makes many leaders uncomfortable because it seems like a loss of control. They associate success with having enough power to make things the way they believe they should be. Being a servant leader seems like putting all the power in other people's hands, and ending up following their needs instead of charting the course. In short, it feels like surrendering the power to lead and sinking into obscurity.

The truth is that leaders who serve this way are often the most successful. People support them and follow them because they are supporting and investing in others. People will work much harder with you if they know you care about them and support them than they will if you just order them around and use power to control and direct them. This is how Jesus led His disciples, straight out of Mark 10 and John 13. It is how Paul and the other Apostles served and led. It is even recognized in the secular business world as being the solid road to success. That's the lesson of books like Good to Great: Why Some Companies Make the Leap ... And Others Don't. Some of the most successful leaders - in terms of the health and prosperity of their businesses - are some of the humblest and most unassuming.

The model of power and control appears to many to be the quicker and easier way to achieve their goals, but like most things that appear that way, it ends up being a more unstable and ultimately destructive path. Shortcuts taken at the beginning result in a foundation of sand.

Just as importantly, the path of servant leadership is a path of accountability and cooperation with others. People who lead this way are much more open to correction and to having people look at their lives and decisions and offer input. They value and listen to the advice of others, following the repeated theme of Proverbs: "Plans are established by counsel; by wise guidance wage war." (Proverbs 20:18) and "in abundance of counselors there is victory." (Proverbs 24:6). And they heed the warning: "Whoever isolates himself seeks his own desire; he breaks out against all sound judgment." (Proverbs 18:1). They determine to get the most out of being challenged or corrected, believing that they grow wiser and stronger by listening. (Proverbs 13:18; 15:32).

This style of leadership comes with built in accountability. People don't have to chase after you and press you to get you to let them take a look at what's going on in your life. Servant leaders are wise enough to invite that kind of attention and input. For that reason, they often last a long time as successful leaders instead of rising high and then suddenly crashing. What McKnight has pointed out is that this model is not only biblical and effective for leadership, it is also the model best designed to prevent disasters like what happened to Darrin Patrick. In a multiplicity of counselors, there is safety. (Proverbs 11:14).
Posted by Anthony Bushnell at 1:23 PM